The project will drive economic growth, create jobs and provide a major boost to the transport industry, agricultural sector and regional communities. 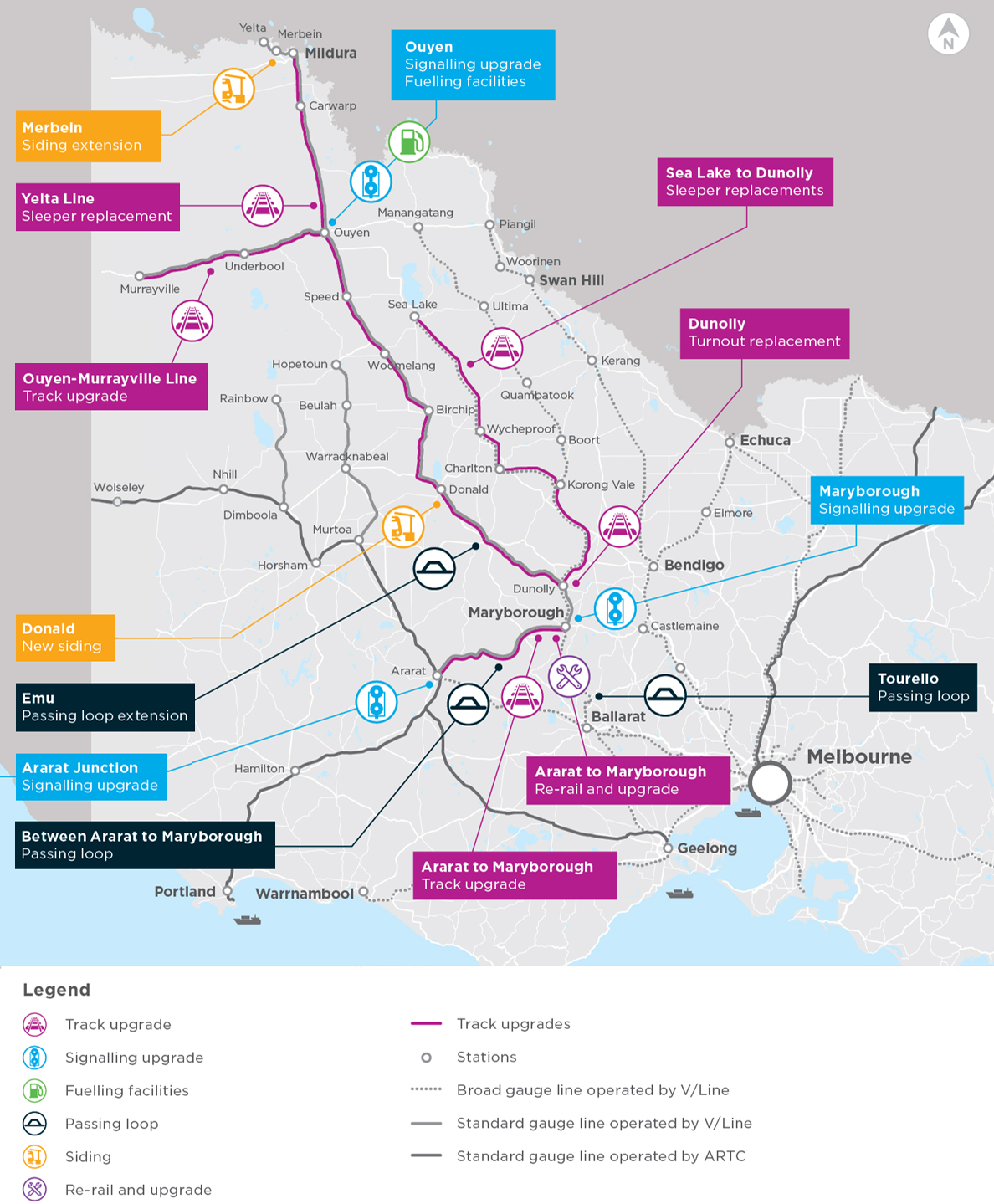 The Murray Basin Rail Project will deliver key benefits for primary producers and freight operators across the Murray Basin freight network, and support 1000 direct and indirect jobs during delivery.

Upgrades to the Ouyen to Murrayville Line, including re-sleepering, adding ballast and adjusting track, are now complete and have removed most speed and heat restrictions which have limited use of the line.

Track upgrades from Ararat to Maryborough, including re-railing and a passing loop, will increase load capacity to 21 tonne axle loading (TAL) and improve travel times by enabling freight trains to operate at higher speeds.

Siding works at the Donald Yard will provide improved operations for freight trains and wagons to be stored when not in use.

Extending the siding at Merbein will allow for the stabling of a 1200-metre train off the mainline to help increase capacity for rail freight users in the region.

Work is also complete to replace approximately 120,000 sleepers between Sea Lake and Dunolly, enabling speed restrictions to be removed along the line.

The revised package of works will increase the number of weekly train paths on the Murray Basin network from 28 paths to 49 paths, removing thousands of truck trips from Victorian roads.

The revised program of works has been developed in consultation with industry stakeholders, with their feedback used to inform the project scope and staged delivery of works.

The project will increase the capacity, reliability and efficiency of the network, supporting the movement of goods by rail.

Rail Projects Victoria is progressing the detailed planning and design work for each package of upgrades.

Track upgrades from Ararat to Maryborough are complete, with re-re railing in this 88 km section finished at the end of last year.

Construction is complete on a 300-metre siding in the Donald Yard, providing additional options for freight trains and wagons to be stored when not in use.

The Merbein siding extension works are continuing, and will allow for the stabling of a 1200m train off the mainline.

V/Line has been appointed to deliver signalling upgrades at Ararat Junction, with works underway.

Significant and complex signalling design is underway on further upgrades including new passing loops and sidings and improvements to Maryborough junction.

Ongoing consultation with industry remains a critical element in planning delivery of the project, to identify opportunities for works to be delivered as quickly as possible while minimising the impacts of construction over peak grain seasons.

Rail Projects Victoria will deliver the project, which will support 1,000 direct and indirect jobs during delivery.

An Alliance of ACCIONA, Coleman Rail and SMEC has been awarded the contract for the current stage of the project, which includes Ararat to Maryborough Line re-railing and Merbein and Donald siding works. The Alliance will also deliver the next package of works, including passing loop upgrades at Tourello and Emu, a mobile refuelling station at Ouyen and signalling upgrades at Maryborough Junction.

A revised Murray Basin Rail Project business case was developed by the Department of Transport and Rail Projects Victoria and submitted to the Commonwealth Government in 2020.

The business case outlined a revised scope of works to optimize the standard and broad gauge networks, which was funded by the Australian and Victorian governments.