A tunnel boring machine (TBM) is the machine used to excavate tunnels. TBMs can bore through a variety of ground conditions, from hard rock to sand.

About the Metro Tunnel TBMs

Four TBMs were used to create the Metro Tunnel's twin 9km tunnels. Each TBM was 7.28m in diameter, weighed more than 1100 tonnes and reached 120m in length.

The heaviest component was the cutterhead, which weighed 100 tonnes and acted as a drill that can tunnel through rock six times harder than concrete. The face of the cutterhead was 7.28m in diameter.

A crew of up to 10 people, including a TBM operator, worked on each TBM at any one time. The TBMs were staffed and monitored 24 hours a day, 7 days a week, and came fully equipped with facilities for our workers, including an office, kitchen and toilets.

They were equipped with a state-of-the-art navigation system that ensured they dug accurately along the tunnel alignments.

The Metro Tunnel Project used mix shield TBMs – commonly known as slurry TBMs – that are purpose-built to suit the local ground conditions. Once the TBM's cutterhead bores through the ground, the excavated material was mixed with slurry and transported back to the above-ground slurry treatment plant. The excavated material was then separated from the slurry and transported to a disposal site.

The TBMs were required to excavate through soft soils such as Coode Island Silt, and hard basalts under the Yarra River and in some sections of the western alignment. Many sections of the tunnel alignment feature a ‘mixed-face’ geology, which is both parts hard and soft.

In 2020, the first TBMs were launched from the Arden Station site towards Parkville.

The first TBM, Joan, was launched from Arden in May 2020 and was followed by the second TBM, Meg, in early June.

After reaching the Parkville Station site, TBMs Joan and Meg were transferred across the station box and prepared for relaunch.

TBM Joan began the 1km journey towards the State Library Station site in October 2020, followed by TBM Meg in November.

TBM Joan broke through at the State Library Station site in December 2020 followed by Meg in February 2021.

In February 2021, Joan relaunched for a final time towards the Town Hall Station site with Meg following in March 2021.

TBM Joan arrived at Town Hall Station in April 2021 with Meg following shortly after in May 2021.

From April 2020, TBMs were launched from the Anzac Station site towards the eastern tunnel entrance at South Yarra.

TBM Millie broke through at South Yarra in September 2020, and TBM Alice arrived in October.

TBM Millie broke through at Town Hall in March 2021 followed by TBM Alice in May 2021. These breakthroughs marked the end of tunnelling for both TBMs.

In August 2019, as Joan the TBM prepared to launch towards Kensington, our Director of Tunnels and Underground Stations explained how tunnelling operations would take place on the Metro Tunnel Project.

Watch our Environment Manager, James Hamilton, provide an overview about environmental management, including noise and vibration, during tunnelling.

Per tradition, each of the TBMs were given a name. They were each also assigned a different colour. Read on to learn about the women who inspired our naming choices. Joan Kirner was the first female Premier of Victoria (serving from 1990 to 1992) as a member of the Labor Party. She was MP for Williamstown, and while Education Minister her reforms included pioneering the Victorian Certificate of Education (VCE). Meg Lanning captains the Australian women’s national team and the Victorian Spirit. She holds the record for the most centuries in women’s one-day internationals and was the youngest Australian (male or female) to score an international 100, when she was 18. 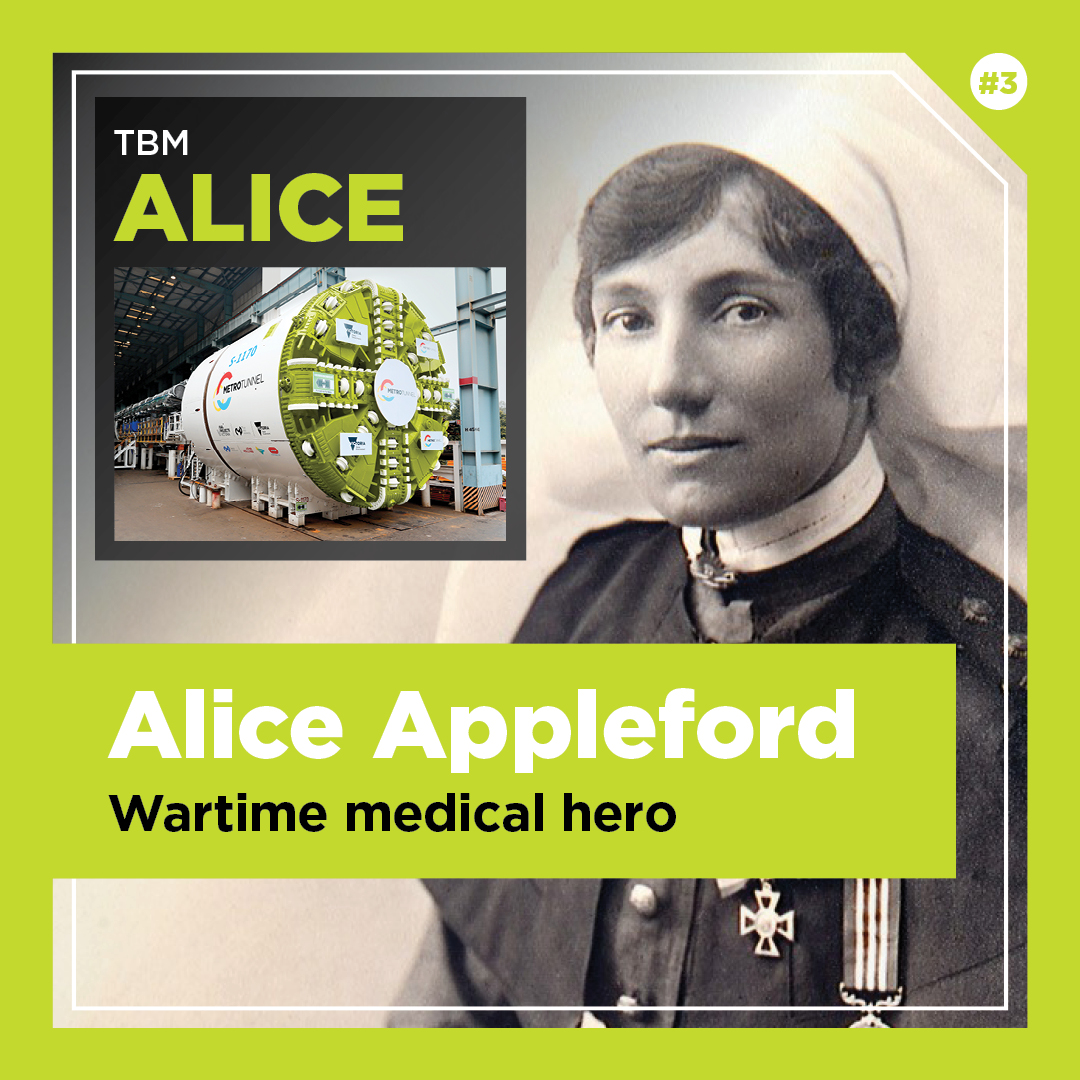 Alice Appleford was an Australian civilian and military nurse who took part in both World Wars. During the First World War she served in hospitals in Egypt and France and was one of only seven Australian nurses decorated with the Military Medal for Gallantry.

Millie Peacock was married to three-time Premier of Victoria Sir Alexander Peacock. After his death in 1933, she won the by-election to succeed him and became the first woman elected to the Parliament of Victoria.