The Australian and Victorian governments are investing in rail upgrades between Geelong and Waurn Ponds. These will deliver more frequent and reliable services on Victoria’s busiest regional line. 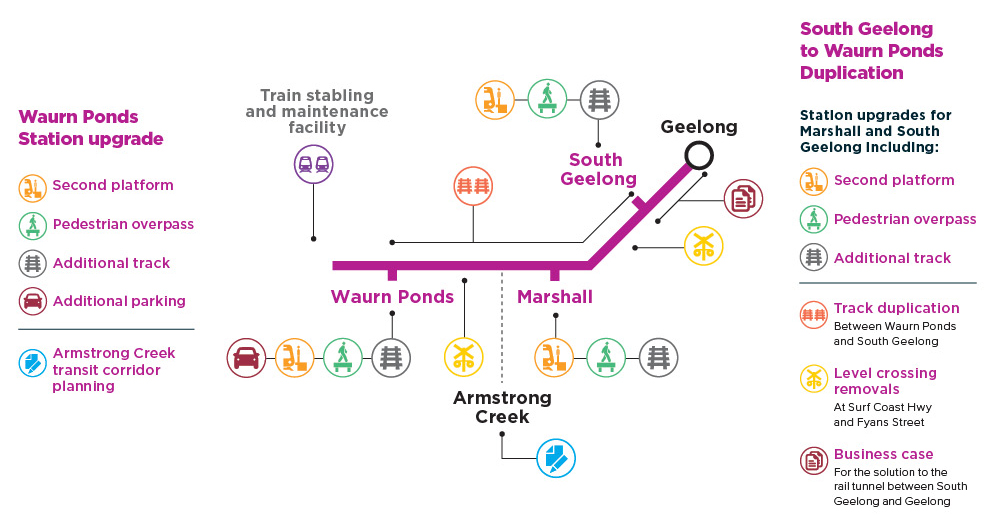 A train maintenance and stabling facility near Waurn Ponds Station.

The South Geelong to Waurn Ponds Duplication which includes:

Planning for the Armstrong Creek transit corridor. This will include considering future land use and population plans.

A business case to determine the infrastructure required to deliver even more services. This includes upgrades to the rail tunnel between Geelong and South Geelong and the rail line over the Barwon River.

What are the benefits?

The upgrades have improved accessibility and amenities at the station. This includes 200 new and upgraded car parks, with more than 500 spaces now available.

The South Geelong to Waurn Ponds Duplication is the next critical step in providing more frequent and reliable services on the Geelong Line.

A new train maintenance and stabling facility near Waurn Ponds Station will support extra services on the Geelong Line. The facilities will also allow trains to begin service on time each day.

Rail Projects Victoria is delivering the staged upgrade of the Geelong Line, on behalf of the Victorian Government.

Find out more about supplier opportunities for the upgrade of the Geelong Line.

Why are we investing in Geelong’s rail network?

Geelong’s population will  grow by almost 50% to approximately 485,000 by 2051. Patronage on the Geelong Line has also tripled since the opening of Regional Rail Link in 2015. It is now the busiest line on the regional network.

The community of Greater Geelong needs a fast and reliable rail service to support its development.

You can stay up to date with our projects via e-newsletters and social media.