As construction of the new Parkville Station continues, there will be some changes to how you drive, cycle and walk around the precinct.

Find out more about the traffic changes on Grattan Street west while we build the new station entrances adjacent to the Peter MacCallum Cancer Centre and The Royal Melbourne Hospital. 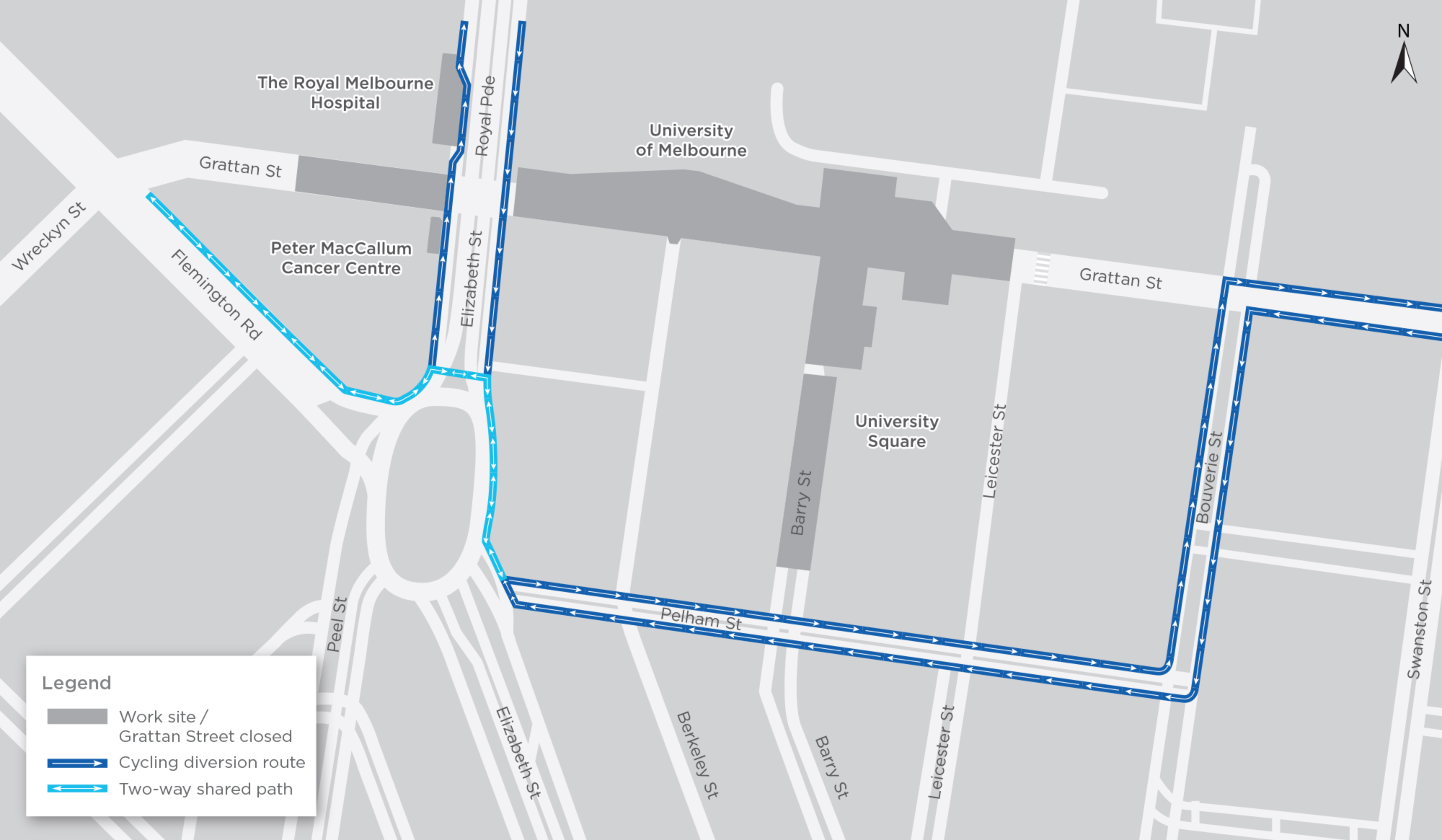 There will be changes to how pedestrians and cyclists travel in the area.

Pedestrian access is maintained around the work site with localised diversions in place.

The northern east west crossing at the Grattan Street and Elizabeth Street/Royal Parade intersection is closed to pedestrians until late 2022.

The western north-south pedestrian crossing at the Grattan Street and Elizabeth Street/Royal Parade intersection has been relocated around 70m west on Grattan Street.

There is a new bicycle route between Wreckyn and Pelham streets via the Flemington Road shared use path to provide a safe and convenient route while construction takes place on Grattan Street west. Cyclists travelling eastbound are advised to use this route.

Cyclists wanting to travel westbound on Grattan Street to Flemington Road are advised to use the Flemington Road shared use path, adjacent to the Peter MacCallum Cancer Centre, or to dismount and walk their bikes from Elizabeth Street/Royal Parade.

The Barry Street pedestrian crossing has been relocated around 50m south.

Trams will continue to run along Royal Parade and tram stop locations will remain the same.

From March 2021 to end 2022, pedestrian access to the Route 19 Royal Melbourne Hospital/Royal Parade stop number 10 will be maintained with localised pedestrian diversions in place. From March 2021 to late 2022, the bus route 505 will not service The Royal Melbourne Hospital/Royal Parade stop. Passengers are advised to use the alternative bus stop at Morrah Street/Royal Parade located 250m north on Royal Parade.

Bus routes 401, 402 and 403 are currently not servicing the Royal Melbourne Hospital/Grattan Street stop. Passengers are advised to use the alternative bus stop on Wreckyn Street.

Information about the changed bus routes and current timetables are available on the Public Transport Victoria website.